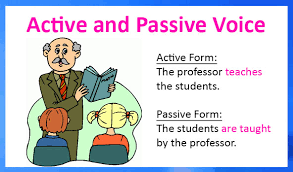 The sentence formation of Simple Past Tense Follows

Letters are brought by the postman. (Passive Voice)

Passive voice is not much used in our native languages, such as Hindi, Gujarati, Punjabi or any other as it looks awkward when it is translated literally. However, it is a usual practice in the English language to use passive voice.

In the IELTS Academic test, passive voice plays an essential role in Task 1 because of its peculiarity in the usage. It is widely used in it because the doer (agent) becomes inconsequential in the sentence construction. In another way, in most sentences in task one and also in our life, we are not inclined to use the doer (agent) over and over again. For example, my car has been moved!

Now, it does not matter who moved it, or I have no idea who did it.

The bottle got (= was) broken.

You will get (= be) demoralized if you keep on watching sad news on TV.

There was a brawl at the party last night, but fortunately, nobody got (= was) hurt.

Some exceptions: get married, get divorced, get dressed, get changed (these expressions are not in the passive voice)

Somebody gave her a rottweiler. (Active Voice)

Somebody gave the cops a tip-off about the raid. (Active Voice)

The rubbish has not been collected from the last two days.

The streets are washed every night, wasting away precious drinking water.

You will be ten printed when you apply for the US visa.

The prime minister was assassinated (= by someone, but we have no idea who exactly did this).

The report on my table was taken (= by some team member)

She was suspected of having a hand in glove in this corruption case. (People suspected her of…).

One believes (that) this sort of counseling is as unacceptable. (Active Voice)

This sort of counseling is believed as unacceptable. (Passive Voice)

You can see the advert of Coco-Cola everywhere. (Active Voice)

The advert of Coco-Cola is seen everywhere. (Passive Voice)

The office next door has been bought (by a Mr. Patel).

If we happen to know Mr. Patel, we will use the active form:

Mr. Patel has bought the office next door.

Before I reached home, my neighbor took Jericho (dog) to a vet.

would be better expressed:

Before I reached home, Jericho was taken to a vet by my neighbor.

The bonus on top of your remuneration is being cancelled/will have to be cancelled this year as the company did not meet the revenue target.